A recording has been added to the website of the recent concert in het Wapen van Kennerland in Haarlem.

There is an event on Saturday April 23rd at 19.30 in Haarlem featuring Michael’s music.
A play is also performed about Otto Frank, Anne Frank’s father “Otto” written by Sue Saunders. 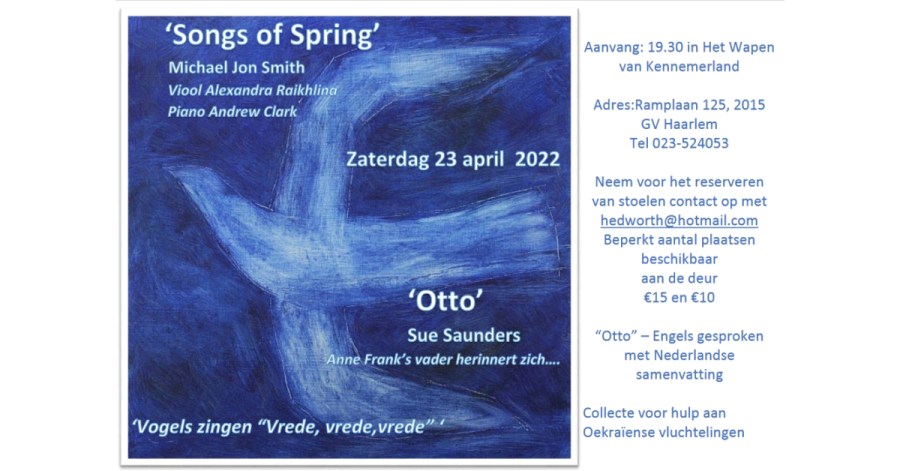 A video has been published on YouTube featuring Michael Jon Smith playing a Viola Solo.
After his professional career Michael still enjoyed playing in several amateur orchestras.
His favourite amongst these was the Tourmalijn Orchestra with which orchestra he is playing this Viola Solo.

Michael Smith performing a solo with Toermalijn orchestra in 2006

Work has begun to digitize Michael Jon Smith’s music.
There are now several works available to download on this website for Viola/Violin, solo Viola, solo Pianoforte, String Quartet and Flute/Pianoforte.
Please contact us if you wish to perform any of these works.

The CD Running To Paradise has been released.

Running to Paradise has also been released digitally !
The album is available to buy at iTunes and every other large digital platform !

You can also listen here.

Concert A Friendship in Music

On Friday 21st February 2020 at 7pm there will be a concert in the Lit & Phil Library in Newcastle upon Tyne, England featuring music by Michael Smith and Christopher Wood, both composers from the North East of England.

The same program will be performed in St Mary’s Church Ambleside on Saturday February 22nd 2020 at 7pm.

‘The still point of the turning world’ (T. S Eliot)

Quirky, sophisticated and romantic by turns, their music defies genre, reflecting the beauty and the drama of the natural world and of humanity within it.

Both composers studied under Herbert Howells – and by a strange twist of fate, neither knowing anything of this connection, they met in 1990, with Smith playing in Wood’s memorial concert at the People’s Theatre a year later.

Includes Deborah Thorne playing Wood’s ‘Lament for a Celt’ and Nicholas Butters on piano, together with members of the Borrowdale Ensemble in Smith’s ‘ Bitter Suite, several of Wood’s beautiful settings of poems Edward Thomas and DH Lawrence for tenor (Austin Gunn) and soprano (Caren Moffett) by, and Dawn Allen leading a group of violinists in Smith’s ‘Enchanted Quartets’.

Tickets available at the door £10

On Saturday May 18th 2019 Michael’s music was performed at the Storioni festival in Eindhoven by Inge IJpelaar, Ien Bouwmans and Marie-Astrid Vermaas. Concert Return To Paradise in Newcastle upon Tyne

There is a concert on October 25th 2018 in Newcastle upon Tyne.

The concert starts at 7.30pm at the Lit & Phil, 23 Westgate Road in Newcastle upon Tyne.
It features Lydia Abell (Viola), Dawn Allen and John Garner (Violin), Sarah Robinson (Piano), Students of the Royal Grammar school and the Sage, Gateshead and members of the Cobweb Orchestra.

On February 4th 2018 Running to Paradise is to be presented at Heeswijk Castle.
A coffee concert is planned starting at noon till 1pm.

For details about this concert:
CD presentation Running to Paradise

It’s possible to combine this event with a visit or tour of Heeswijk castle.

The CD Running to Paradise has been released.

Running to Paradise has also been released digitally !
The album is available to buy at iTunes and every other large digital platform !

Donations can be made out to NL92INGB0008046454, Stichting Michael Jon Smith in the Netherlands

The financial statement for 2016 has been published.

Recording for the CD, Running to Paradise, was completed in 2016.
Preparations for the production of the CD are in the final stages.
The CD is expected to be published in the summer of 2017.

There will be a concert on May 7th 8:15 PM in the pianola museum in Amsterdam.
This concert is the kick-off for our CD recording project, which has been organised for this year !

Playing at the concert are:

Programme for the concert:

Tickets will be 10 euro.

send an email to: info@pianola.nl

with the details (Concert Michael Jon Smith, May 7th 8:15 PM) of the concert. You will receive an answer about the availability and how to pay for your tickets.
Your tickets will be available at the counter. The museum is open from one half hour before the concert starts.
Please note: If a concert is cancelled, you will get notice and you will get a full refund of the money you paid for the tickets.

The financial statement for 2015 has been published.

Recordings from the concerts in Newcastle upon Tyne (August 7th 2015) and Edinburgh (August 10th 2015) have been added to the website:

Meanwhile preparations are ongoing for the recordings early next year.

RUNNING TO PARADISE (Tickets on sale in June)

For august 2015 our sister organisation in England has organized two concerts in Newcastle and Edinburgh.

Performance of String Quartet in A by Michael Jon Smith

Followed by ‘Mostra’, a play about the C18 composer Charles Avison, written
by Smith’s brother, Sue Saunders, with Gordon Russell as Avison. (Directed
by Hugh Keegan)

Smith and Avison – born and brought up in Newcastle on Tyne, England, three
centuries apart

1767 –  ‘Such trickery, such a pompous display of art!’  fumes Charles
Avison at the latest musical trends.

Alone in his attic study, the composer recalls personal triumphs and family
sorrows – but above all, the loves and friendships  that make up his very
own soul music.

On April 13th 2013 Stichting Michael Jon Smith was presented in the Pianola Museum in Amsterdam.

Due to the limited seating arrangements this was a closed event.

After the opening friends of Michael played several of his compositions.

The organisation would like to thank them and all of the people who attendend this event.